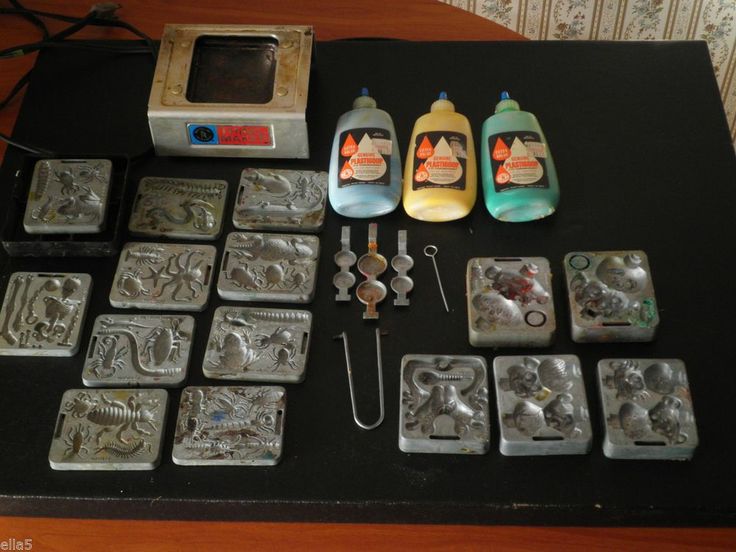 Diana comes down stairs and greets me this morning as I’m frying bacon:

Of course I didn’t remember. I come from a long line of sleep-walkers, sleep-talkers, sleep-moaners, sleep-singers, and sleep-fighters. My specialty is sleep-screaming-like-a-six-year-old-girl, though I am also skilled at sleep-kung-fu and sleep-mixed-martial-arts. More than once I have cracked Diana in the jaw or eye thinking she was trying to kill me.

I was alerted to this condition the first time I slept over at a friend’s, house back in Mississippi. John and I would have both been around six or seven at the time, and I was pretty wound up because he had just gotten one of those Creepy Crawler Thingmakers.

For those who didn’t grow up in the 60s and 70s, the Thingmaker was basically a child-sized stove top used to turn liquid goo into rubbery bugs and reptiles. And this was no Easy-Bake, light-bulb-powered girl oven, either. The Thingmaker plugged into the wall and produced around 350 degrees of skin-searing heat. Seriously, you could fry an egg on one of these things. It was a third-degree-burn factory for kids, and, like lawn darts and clackers, was one of many toys from that era guaranteed to cause serious injury or death when used as directed.

The Thingmaker came with an oven, several metal molds containing various insect and reptile shapes, a set of cheap mold tongs, and some plastic goop called Plasti-Goop. They also had glow-in-the-dark Plasti-Goop and even an edible variety (oh yes: Gobble-De-Goop). You poured the goop into the mold, set the mold in the oven, and eventually the goop would cure to a rubbery texture. Then you were supposed to remove the mold and let it cool down before pulling out your new lizard or spider, but no six-year-old has the patience for that. Hence the thick burn callouses I carry on my fingers to this day.

Eventually you get tired of Plasti-Goop and start experimenting with other household substances. I haven’t seen the stats from those days, but I’d be willing to bet a significant number of house fires were caused by some kid trying to make a tarantula out of cooking oil or gasoline. This is called scientific discovery and is how we found a cure for Polio.  Anyway, John had just gotten one of these awesome toys and had invited me to spend the night so we could try it out.

I showed up at John’s house after supper with my sleeping bag and case of Hot Wheels cars. We spent the evening making rubber snakes and setting up race track all over his living room. Then John’s mom made pallets for us in the middle of the floor and sent us to bed with our burned fingers covered in Bactine and Band-Aids. As far as I knew, I passed the night in dreamless bliss.

The next morning, I woke up to find John’s entire family sitting around staring at me and looking like shell-shocked soldiers from the trenches of the Somme. John’s mom gave me a weak smile, helped my roll up my sleeping bag. Then she packed me off down the street to my own house without any breakfast.

“Did you enjoy your sluuuuuuumber party?”
“It wasn’t a slumber party! But, yeah, it was cool, man. We played with John’s Creepy Crawler and raced our Hot Wheels and…”
“Paul said you freaked their whole family out last night.”
“What?”
“He said you stood up in your sleeping bag and started screaming.”
“I did not!”
“Yes you did. You woke everyone in the house up. Then you just laid back down and went to sleep.”
“You’re lying.”
“Am not, you little weirdo. Go ask Paul and John.”
“I will.”

I did. And apparently I did. I was never invited back to another sleepover at John’s. In fact I was never invited to sleep over at any other kid’s house in the neighborhood, either. Neighborhoods were a little closer in those days and word got around. A similar pattern followed me the rest of my life.

Once during the evasion phase of Air Force aircrew survival school, I woke up in the woods in middle of the night to find myself twisted up in my sleeping bag, laying half out of the shelter I had built, and yelling, “Mom!” When I eventually came fully awake, it was all quite in the woods around me, and from nearby in the dark I heard, “You’re mom’s over here,” followed by general laughter (including my own).

So, yeah, Diana was used to my antics and had even developed coping mechanisms.

“Nope. What did I do this time?”
“I woke up and you were standing up in the bed, flexing your hands, and staring at the door.”
“I’m sure I had a good reason.”
“You did. I said, ‘Honey, what are you doing?’ and you said in a very calm, commanding voice, ‘There’s a ghost in the hall. I need you to open the window and get out onto the roof, and go to the neighbor’s.'”
“Well, did you?”
“No, I didn’t. I called you a dork and told you everything was okay and to lie back down.”
“Hey, you need to get into the habit of doing as you’re told during an emergency. The next time the ghost-ninja-burglar-whatever might be real.”
“You know what I love about you?”
“The fact that I don’t keep a loaded gun under my pillow?”
“No… well, yes, but I love that even when you’re asleep you think of my safety first.”
“Well, except for that 15-foot drop from the roof to the ground.”
“Yeah, that’s definitely a flaw in your escape plan.”
“I think you can make it. We’ll run some ghost drills later.”
“No, we’re not going to do that.”